Back to page
Add topic

-Did you straight up delete the pages for the Overseer, Ethereal Umbra and other removed content? Why not just keep those pages and note that the content described has been removed from the game? Or at least make a 'removed content' page or something. Removing the info on this removed content is pointless and awful for archival and informative purposes. Also what if someone is using an older version of the mod?

I coded a new and improved AI. In addition to this, I made a slight resprite (based on really good fan-art of the boss) and gave it a glowmask. The overseer just should not have been removed because it gave the mod a proper ending.

The boss by default will chase the player at a high but consistent speed rather than dashing. It spawns haunted wisps as it takes damage It enters its second phase at 50%/65% health.

- Creating several portals(indicating where it will teleport), the teleport is follow by 3 rapid dashes. - Shooting 4(8 in the second phase) ghastly saw blades. It will not loop to the beginning if any saw blades are active.

Additionally, in phase 2, it throws in this attack

- As mentioned above, they are expert exclusive. - Their AI is downgraded significantly to dungeon spirit AI to prevent cheap hits

Sounds kind of like how Catalyst Mod re-added Astrageldon Slime as a superboss.

And can you upload that Overseer resprite?

And when will the mod be on the mod browser?

Asking about my overseer idea[]

Yes. I am currently working on a cool addon that mainly focuses on fitting removed content into the mod. There will also be "New" themes. It will also add a few new stuff. Some Re-additions - - Those 3 bosses - The original tide enemies - Solar flower minion - bramble dagger (dropped by briar mimics) - Old Starplate raider fight in the form of a new boss - Old Scarabeus fight in the form of a miniboss called the colossal scarab

Some changes to the base mod -

- A complete overhaul to vinewrath Bane, now more chaotic - some changes to the existing bosses - the tide is now in tiers like old one's army - the blood gazer is now a miniboss, re-added and resprited the true blood gazer

It May take a while to make. It won't come out until at least the 1.4.3 update is released for the mod reasons - I don't know how to mod call for the blue moon event

It is a very minor resprite. it was based on fan art of the boss i saw

The Addon will include some silly config settings.

The Configs and what they do - - Revenge on devs : Makes everything one-shot characters named one of the current spirit mod devs(What kind of mod creator would remove their final boss?!) - Google translated names : Everything is google translated 15 times These are the results for the bosses

This guy spawns in the underground spirit biome. Also, in the addon, the LCS version of the spirit surface will play on the surface of the biome because the current one makes the biome sound like a desolate wasteland

A silhouette of the enemy, which is called the Walking Nightmare (not to be confused with the removed waking nightmare enemy).

The addon will also include new adventurer quests and paintings.

The addon has a new event, the purple moon. It is a corruption based twist on the blood moon. Blood Moons have a chance of being replaced by this event, Indicated by the message, "The blood moon is twisted by evil".

The following enemies spawn. Four of them are re-additions. - The Putrid Head Cluster - The Crippler - The Bubonic Scourge - The Shadow Pup - The Worker - The Wrath

Various changes to spirit mod bosses - In expert mode, vinewrath bane will summon a darkened version of the first phase upon transforming. Second phase is renamed to Vinewrath Bane - Atlas will spawn with 4 arms instead of 2 - The infernus skull teleports faster. The final infernus skull phase will happen regardless of if it is expert mode. the normal mode version is the current expert final phase. Here is it's expert changes

What about Ethereal Umbra & Illuminant Master? And may i suggest putting in the old ancient avian (ancient flier) fight?

The Overhauled AI for vinewrath bane is a modified version of the old AI At the moment, the ethereal umbra and illuminant master will not be reworked. For the Ancient Avian, I decided to combine the old and new AI.

The overseer's summon is non-consumable, so the player does not have to grind moon lord. The bramble tooth can be used on the surface. jewel crown can be used anywhere. 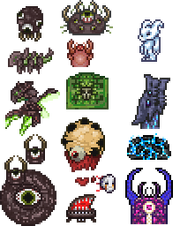 I found a way to add enemies to the tide, and found out how to call for the blue moon event

I still need a name for the unnamed star worm.

How did I add enemies to the tide?

Let me know if there is a better solution. I had to make a completely seperate tide event, and I had to make it override the normal tide.

Calling for the blue moon event was far easier than I thought.

I haven't found a name for this addon. Internal name is SpiritModEX.

Infernus Skull re-sprite and the Hell bound Casters and Chargers[]

My add-on is almost ready. I just need to finish up the revisions and play test it. I forgot to mention the add-on will add a new class, the necromancer. This class is a combination of mage and summoner. The death wind artifact weapon is now a necromancer class weapon.